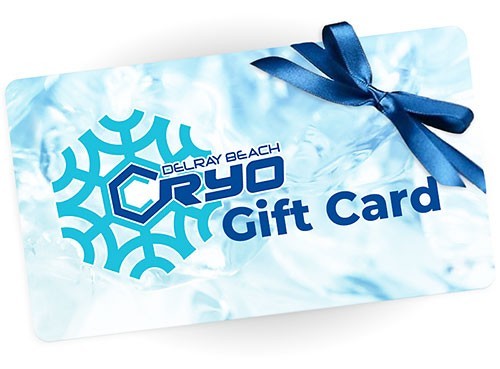 Please fill out the form below and we’ll contact you ASAP to hook you up with a gift card. They’re going to LOVE IT!

Whole body cryotherapy is safer, healthier, and more effective than a traditional ice bath. This process exposes the body to hyper cooled air -200°F to -240°F, triggering the body’s natural healing mechanisms as though it were freezing. Blood will accumulate in the body’s core in order to become warmed, and the body’s capillaries will expand to approximately 4 times their normal diameter. White blood cells will flow through the body faster, accelerating the healing process by up to 50%. The brain will trigger a release of endorphins, adrenaline, and other hormones into the body. During this process, which last 2 – 3 minutes, the brain stimulates the body’s organ regulatory functions resulting in increased energy, cell rejuvenation, immune system boost, and overall system self-healing.

One of the effects of Cryotherapy that is attributed to its promising benefits is vasoconstriction that reduces the circulation to the affected area. Vasoconstriction slows down the body’s metabolism and reduces its demand for oxygen. Aside from this, cold application or cooling below 68°F (20°C), also helps retain the heat in our body and reduce acetylcholine production. Thus, relieving congestion and muscle spasm. On the other hand, the analgesic effect of cold therapy is related to its counterirritant action, its influence on the nerve endings, and its ability to reduce metabolic activity. During a cold therapy, the skin temperature drops almost immediately, which is subsequently followed by a decrease in subcutaneous temperature. However, structures beneath the subcutaneous layer are much less efficiently cooled. As a result, the patient experiences cold perception followed by aching or burning sensation and cutaneous anesthesia (Pfiedler Enterprises, 2014).

SAVE TIME: COMPLETE THE WAIVER NOW